This article looks at how these indices are built, how they differ from real indices and the potential consequences for the investors and for the banks.

For investors looking for yield, autocallables on indices have been a blockbuster for years. The principle of the autocallable payout is simple: the investor gets coupons that are substantially higher than the prevailing interest rates but they put their capital at risk. On each annual observation date, the payment of those coupons is subject to the equity index being above a predetermined level. At maturity if the equity index is above a barrier (typically fixed at 60% or 70% initial level), the full capital is reimbursed. If the equity index is below the barrier, say 55%, then the investor gets only 55% of their initial investment back.

Billions of euros of such autocallables are issued every year in Europe. As such, banks’ trading desks accumulate the same risk: they are long dividends and long volatility on those indices, especially on the Eurostoxx 50. The covid outbreak of 2020, where companies unexpectedly cut their dividend payment, was the source of hundreds of millions of euros of losses for those houses. They are now pushing special indices (so-called decrement indices), designed to offer higher coupons and reduce the risks on the banks’ trading books.

We will first describe how those decrement indices are designed, how they differ from real indices and the potential consequences for the investors and for the banks.

How usual indices are constructed and their economic meaning

Although the 4,400 level does not represent the wealth of the investor, it represents the price that an investor will have to pay to buy one unit of the index in one year.

Hence, for different reasons, both the total return and the price return versions of an index have an economic meaning.

A decrement index is a synthetic index: similarly to a price return index, it takes as a base a total return index and detaches dividends, but here those dividends are set in advance. This synthetic dividend is called decrement or contractual dividend.

It is usually paid continuously (so a little bit every day as opposed to twice or four times a year). It can be defined as a percentage (very often five percent) or as an absolute number of points. As such, every day the decrement index will diverge from the total return index by the daily decrement.

Unlike a total return index or a price return index, a decrement index has no economic meaning as the decrement is (often) set to a level that is unrelated to the real dividends.

The advantage for the banks is obvious: as the synthetic dividend is agreed in advance, there is no dividend risk anymore for the banks. Only the volatility risk remains.

The advantage for the client is that the decrement indices provide higher coupons than normal indices, at a time where the real indices exhibit distressed dividend levels.

The dividend market and its implication on the attractiveness of autocallables

Below is a table recapping the dividend yield of the Eurostoxx 50: Here is a graphical representation of that dividend yield. The blue part corresponds to the past realised dividend. The red part shows the implied dividend market (from the dividend futures market). With those depressed levels of implied dividend, the Eurostoxx index does not offer very attractive coupons when used as an underlying for autocalls. No surprise then that decrement indices get a lot of interest from investors, but with higher coupons usually come higher risks…

By construction, a decrement index will perform differently than a real index.

Very clearly in the early years where the dividend yield was close to five percent, both indices had similar returns. But since 2013, the underperformance of the decrement index is important.

Over the observation period, the decrement index underperformed by a bit more than 20%. If the decrement had been chosen at more reasonable level (three percent for instance which is equal to what the dividend has actually realised over the period), there would not be such an underperformance. One can easily estimate the underperformance of a decrement index over the real index:

If one believes the real dividend yield of the Eurostoxx will be three percent, one could choose a three percent decrement Eurostoxx index. It would provide a higher coupon because three percent is still higher than the implied dividend of 2.5% but should not exhibit any future underperformance.

On the other hand, going for a five percent decrement will lead to a higher coupon but is almost the assurance of future underperformance.

Although the decrement is usually defined as a percentage, it can be sometimes defined as a fixed amount or number of index points. It means that wherever the index will be in the future, the same absolute amount will be deducted from it.

Imagine an index starting at 1000 points. Let us assume that index has a natural dividend yield of 3%, and we create two decrement indices one with 5% decrement and one with 50 points decrement. With an initial index level at 1000, both decrement seem equivalent as they have the same yield of 5% (50/1000 = 5%).

After one year, we will have the following performance:

As time goes and if the index stays at the level, the underperformance of the 50 points decrement will increase versus the five percent decrement.

On the contrary, the 50 points decrement will outperform when the index has a positive performance. Let’s take the case of a total return index going quickly to 1500.

Composition and marketing of decrement indices

As we have seen, the historical dividend yield of the Eurostoxx being 3.50%, the five percent decrement Eurostoxx 50 will exhibit a historical underperformance of 1.5% per annum. This does not make the marketing of such indices easy.

One possible twist consists in modifying the index slightly to introduce some historical outperformance. It is usually achieved by applying equal weights (as opposed to market cap weights) to the component of the index.

The graph below shows: One can see that the equally weighted decrement managed to create some outperformance until 2019 (red over blue thanks to the size factor) but it has underperformed since then. Nevertheless, both decrements underperformed the real index and the marketing issue is not resolved.

Then one needs to add some additional marketing flavour to the decrement index and change its name, so it becomes a benchmark as such and is not compared anymore to an existing index. Very often, fashionable or attractive keywords are used (look for ESG, green, zero emission, ocean, select, climate, impact, leaders etc). Structured product houses then tend to come up with their own thematic decrement indices over which they have exclusivity. That’s obviously not good news for end investors as it makes the comparison of the different offerings more complex.

Hedging (and marking) the volatility

Beyond the difference of the composition, let’s see how the decrement itself introduces a difference in implied volatility. For the sake of simplicity let us assume that interest rates are zero. We want to hedge a 10-year at-the-money (ATM) put on the 5% decrement Eurostoxx (market cap weighted as the real index) - the only option available are options on Eurostoxx. Should we buy an ATM put on the Eurostoxx?

The answer is no, as it would mean that the five percent decrement ending at 100% is equivalent to the real index ending at 100%. Given the difference in expected dividend, it cannot be the case.

So to hedge the ATM put on the 5% decrement index, the trader should sell the 128.40% strike on the real index. And so the ATM implied vol of the five percent decrement should be equal to the 128% strike volatility of the original index; looking at the volatility surface of the Eurostoxx below, this equates to a 1.64 volatility point difference (18.47% - 16.83%). 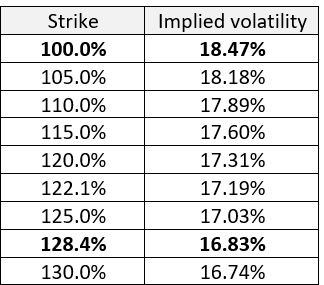 So the trader’s position will be:

Let us assume nothing moves in the market, except the implied dividend yield of the Eurostoxx which moves from 2.5% to three percent. Then the ATM volatility of the five percent decrement should correspond to a strike of

So the new ATM volatility for the 5% decrement should be remarked to 17.19 (from 16.83) and the trader will make some money on his long position.

So, because of the volatility skew of Eurostoxx, the trader still has long dividend risk, even with a decrement index. Obviously that dividend risk is only a second order effect with much less amplitude that the plain dividend risk a non-decrement index would expose the trade to. But as notionals on those autocallables are issued in extremely big sizes, it cannot be ignored.

Eric is currently head of structuring at Anova Partners, based in Zurich, where he drives the firm’s financial engineering efforts.

He started his career as an exotic trader at Goldman Sachs in London. He was there for eight years, trading on the index and single stocks exotic book. After a short interval with the Boston Consulting Group, Eric joined Leonteq as global head of structuring and head of financial engineering.

He was also previously a professor of financial engineering for the MSc International Finance at HEC Paris.

He is a graduate of the Ecole Centrale Paris, HEC and the London School of Economics.

A guide to the SRP database