China Merchants Bank realised a net profit of CNY50.1 billion (US$7.3 billion) in the first half of year, down 1.5% from a year ago, as its increased net operating income was offset by a 22.3% increase of expected credit losses at CNY40.4 billion, mostly on loans and advances to customers.

The net operating income grew by 7.1% to CNY148.2 billion year-on-year (YoY), among which net interest income was CNY90.9 billion, up four percent YoY.

Net fee and commission income rose by 8.5% to CNY42.3 billion, mostly driven by a 32.4% increase of income of agency services fees and a 10.4% increase of commissions from trust and other fiduciary activities.

Operating expenses saw a 11.1% rise to CNY44.9 billion as the bank ‘further advanced the exploration of its digital business model’.

China Merchants Bank has benefitted from the significant growth of these ‘high-cost’ deposits, which invited ‘enhanced control’ over their volume and price. The measures, along with the promotion of ‘low-cost’ deposits, will help ‘optimise the deposit structure and guide deposit cost downward’.

The bank is currently the largest issuer in the country having issued 941 structured products since January, followed by Agricultural Bank of China (884 products) and China Guangfa Bank (350 products). This is a sharp decline from the 1,490 products in 2019, SRP data shows.

There are 614 structured deposits with range deployed as the most popular payoff. They are tied to the performance of XAU/USD (458 products), gold (150 products), CSI 300 Index (four products) and CSI Smallcap 500 (two products).

The remaining are structured notes wrapped as wealth management schemes. They are linked to the performance of CSI Smallcap 500 (156 products), CSI 300 Index (128 products), gold (37 products) and crude oil (6 products). Bull bear, knockout and digital are the mostly used payoffs.

In H1 19, the bank expanded the supply of products like structured deposits and large-denomination certificates of deposit in order to ‘cater for the needs of certain original wealth management customers after the release of the New Regulation on Asset Management’.

In the H1 20, the balance of these deposits as percentage of deposits from customer increased, however the balance of structured deposits dropped by four percent to CNY495.1 billion YoY.

Chinese state-owned banks have been required to scale down structured deposits, which tend to offer a higher return than time or demand deposits while offering at least 90% principal protection, to approximately two-thirds of January’s level by the end of the year, SRP reported. 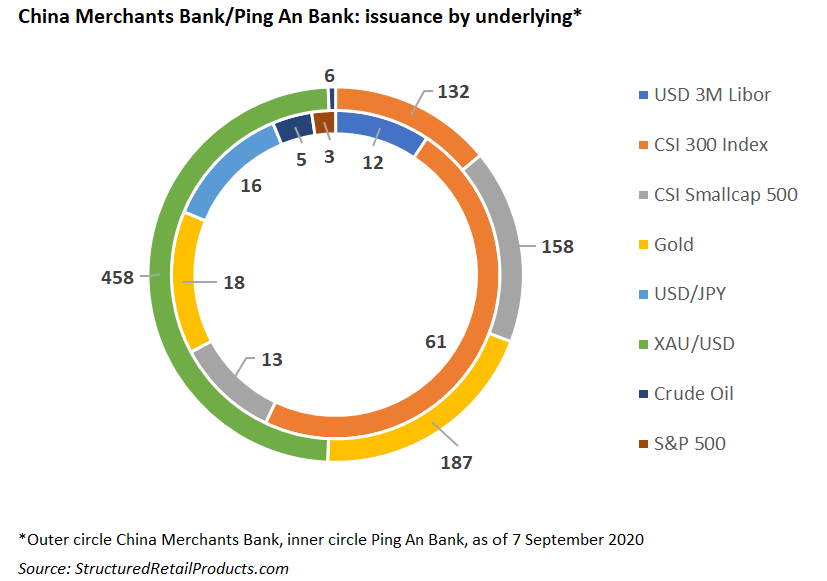 The subsidiary of Ping An Insurance Group reported a net profit of CNY13.7 billion in the first half of the year, a 11.2% drop YoY as its impairment losses on credit and other assets surged by 41.5% to CNY38.5 billion.

Interest income was up 15.3% to CNY50.3 billion mainly due to an increased daily balance of loans and advances and lowered loan prime rate (LPR).

Non-interest income rose by 15.8% to CNY28 billion driven by ‘the increase in the commission income from agency sale of funds and trust plans to personal clients as well as return on bond investments’. Meanwhile, operating expenses were up 7.8% to CNY22.2 billion.

As at 30 June, the bank had a balance of structured deposits of CNY561.4 billion, down 8.8% compared with that as at 31 March, in an effort to ‘optimise deposits structures’ by scaling down the ‘high-cost’ instrument.

The balance of principal guaranteed asset management products was down by 39.3% to CNY40.8 billion compared with that as at 31 December 2019 while off-balance sheet, the non-principal guaranteed counterpart including structured notes, increased by 12.7% to CNY665.3 billion during the same period.

Ping An Bank has issued 128 structured deposits translating to a market share of 5.67% year-to-date, SRP data shows. Yet it earned the crown as the largest issuer (1,863 products) in China in 2019 and ranked the second in 2018 with 5,723 products after China Minsheng Bank.