The subsidiary of Kiatnakin Phatra Financial Group has kept a safe lead with 884 structured notes issued during the first nine months of 2020, despite a 74% plunge YoY amid an overall scaledown in Thailand. It was followed by Siam Commercial Bank and CGS-CIMB Securities.

With a tenor no longer than six months, the reverse convertible notes (RCNs) were sold to Thai and international institutions, and offered no capital protection.

Food and beverage replaced healthcare as the most favoured underlying sector while the number of products linked to financial services rose to 12 from one, making it the eighth popular choice after oil and gas, healthcare, utilities, real estate and basic resources. 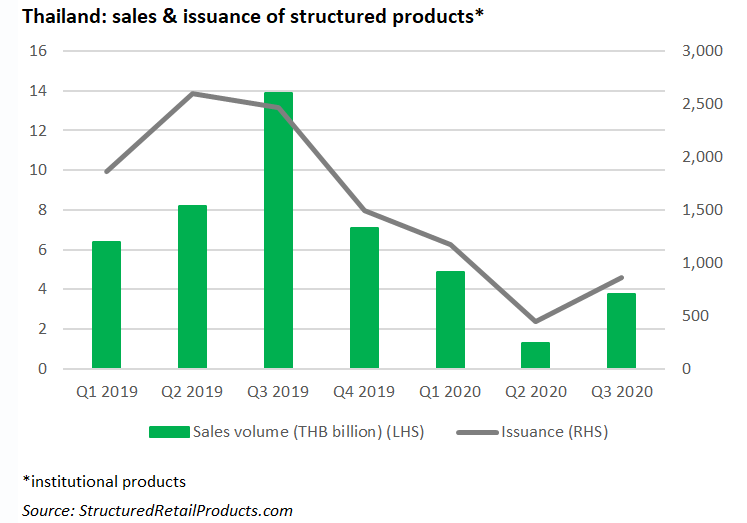 Expenses rose to THB44m from THB33m in the quarter YoY, bringing those to THB130m from THB94m in the nine months.

The top favoured underlying sectors remain the same for the largest commercial bank in country – oil and gas as well as basic resources. Travel and leisure made it to the third with 20 products linked to it while G10 currencies were unseen after they were tied to 11 products in 9M 19.

Besides RCNs, the bank issued 14 dual currency notes linked to USD/THB, down from 27 in 9M 19. The majority of them had an investment period of 30 days while two had a year. They were sold at US$ 13.64m-equivalent.

The 50-50 joint venture between China Galaxy Securities and CIMB Group has issued 120 products for international and Thai institutions during the period from January to September, a slump from the 1,088 products YoY.

All the products are RCNs. Thai Oil was the most popular underlying with 21 notes tied to it, but they only contributed US$1.2m while 11 notes linked to Airports of Thailand brought in US$7.89m.