The Shenzhen-headquartered wealth management subsidiary of China Merchants Bank, one of the most active structured product issuers in the country, issued its first structured product linked to the performance of the Multi-asset Momentum Allocation (MMA) index, an in-house developed quantitative investment strategy (QIS) index, in May 2020.

The index covers 16 assets including CSI 300, CSI Smallcap 500, S&P 500, DAX, China and US treasury bills, gold, crude oil and copper with a heavy weight on bonds. Calculated by Citic Securities, the MMA index was launched in December 2019.

There was a severe lack of liquidity in the market at the beginning of March when stocks, bonds and gold slumped simultaneously - Cui Huijun

“We gradually reduced the equity weight in the first quarter of 2020 while increasing the allocation of bonds and gold, based on the quantitative signals of major asset types,” Cui Huijun, general manager, quantitative & derivatives investment department at CMB Wealth Management, told SRP in a written response. “As a result, the MMA index made it through the major markets crash in March.”

Cui and his team are still reflecting on the market plunge and its impact on the MMA index despite the index’s satisfactory performance. “Affected by the extreme market conditions, various types of assets covered by the MMA index briefly posted a positive correlation,” said Cui.

“There was a severe lack of liquidity in the market at the beginning of March when stocks, bonds and gold slumped simultaneously,” he added. “The abrupt shift in the correlation between assets led to a certain degree of drawbacks of risk parity indices including the MMA index.”

To cope with black swan events like the breakout of Covid-19, CMB Wealth Management has geared up its effort in researching the correlation between assets.

“When the correlation between assets increases sharply, which often is accompanied by a sharp rise in the short-term volatility, the MMA index will automatically reduce its targeted volatility or lower the risk budget of certain assets in order to control its overall risk exposure,” Cui said, adding that the index volatility can also be better managed “by increasing the observation frequency and adjusting the maximum position weight accordingly”.

By March 2020, the MMA index posted a return of 7.4% pa., a volatility of 4.91% and the sharpe ratio of 1.5. Two months later, CMB Wealth Management introduced a one-year product tied to the MMA - Zhaorui Global Asset Momentum - having observed the index’s real-time performance for approximately one year. 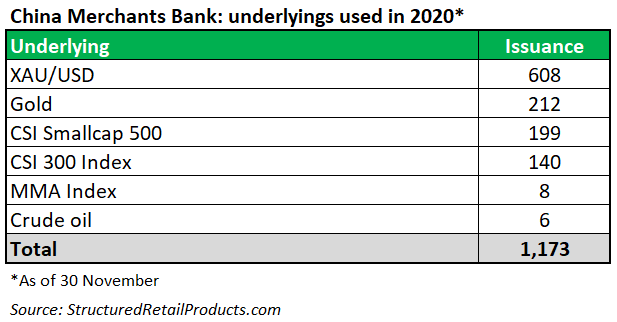 The Zhaorui product, which is distributed by the parent bank, has a European call spread and is not principal-guaranteed as Chinese regulators require for asset management products.

The first tranche targeted a volume of CNY200m (US$30.9m) with a benchmark return between 1.5% and 7.4% pa. That amount was realized within the first subscription day, according to Cui. “The product features a combination of fixed income and option with a heavier weight on the former in terms of its strategy,” he said.

CMB Wealth Management has issued eight tranches of the one-year product on a monthly basis and began to offer the product with a tenor of two years in September 2020.

The risk asset holdings of the MMA index rebounded between March and October out of concern for the near US presidential election and with the market volatility easing after the election, most of the risk budget has been allocated to indices and domestic commodities, according to Cui.

“We’d also been slowly increasing the overall leverage level of the MMA index and eventually embraced a wave of bullish market at the end of 2020,” he said. “Our R&D focus remains on the investment strategy of the MMA index in the near future.”

The application of QIS in structured products is at an early stage in the Chinese market despite the great potential following the regulatory overhaul in asset management products in 2018, as reported by SRP.

Global interest rates have been downward for long under the ‘uncapped’ quantitative easing policy led by the US Federal Reserve. At present, major developed countries such as Japan, Europe and the US have seen zero or even negative interest rates, according to Luo Xuan, head of QIS trading at CLSA, a Hong Kong-based subsidiary of Citic Securities.

“This has enlarged the volatility of the treasury assets with long-term value (covered by the QIS indices developed by Citic Securities) and limit their room for price growth,” said Luo.

“We are likely to include more high-quality assets like Chinese assets and more emerging market assets. At the same time, we will try to diversify asset classes, including but not limiting to foreign exchange, inflation-protected bonds and REITs.”

According to Luo, the foreseeable global vaccination campaign may contribute to a rise in inflation as the economy recovers with the return of the QIS indices likely to be impacted if central banks tighten the liquidity, which may lead to a bearish performance of stocks and bonds.

However, the use of QIS indices in China have a positive outlook as they incorporate a critical weight of commodities like what the MMA index does, which will benefit from the bearish stock and bond performance if that occurs, said Luo.

“In addition, QIS indices can help ease the market volatility and mitigate the drawbacks. Their returns are expected to become more stable when they’re held longer.”