Mirae Asset Daewoo’s equity-linked securities (ELS) and derivative-linked securities (DLS) have recorded sales KRW1.66 trillion (US$1.49 billion) and KRW0.44 trillion with a market share of 16.4% and 4.6%, respectively, in Q4 FY20 ended in December 2020 after a continuous decline since the first quarter.

However, full-year issuance of ELS and DLS at KRW8.14 trillion stands at nearly half of the amount recorded in 2019, according to the firm’s FY20 financial report. 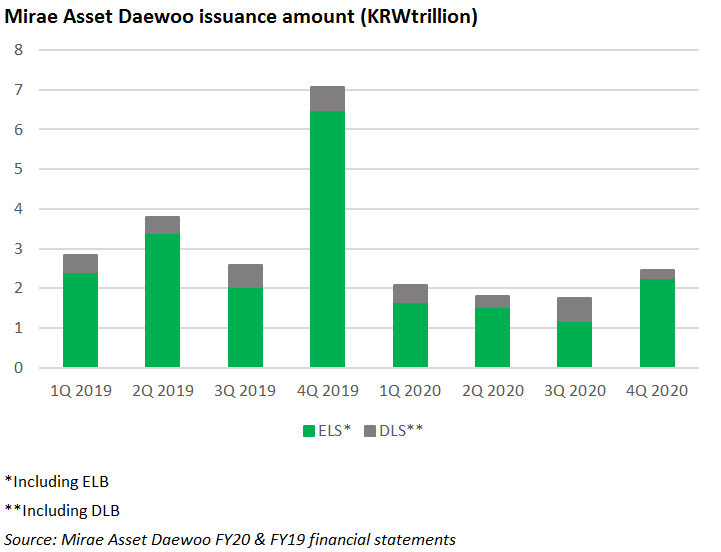 As of the end of 2020, the balance of ELS and DLS reached a record high of KRW7.54 billion, up KRW0.72 trillion quarter-on-quarter (QoQ) or up KRW0.66 trillion year-on-year (YoY), which represents 5.5% of the balance of total wealth management (WM) products comprising mutual funds, wrap accounts, trusts and pensions, ELS and DLS.

By division, WM revenues rose by KRW4.2 billion to KRW61.3 billion while trading income grew by 50% to KRW370.8 billion QoQ. Together both accounted for 58.3% of the total revenue from brokerage, WM, investment banking, trading income and interest income. 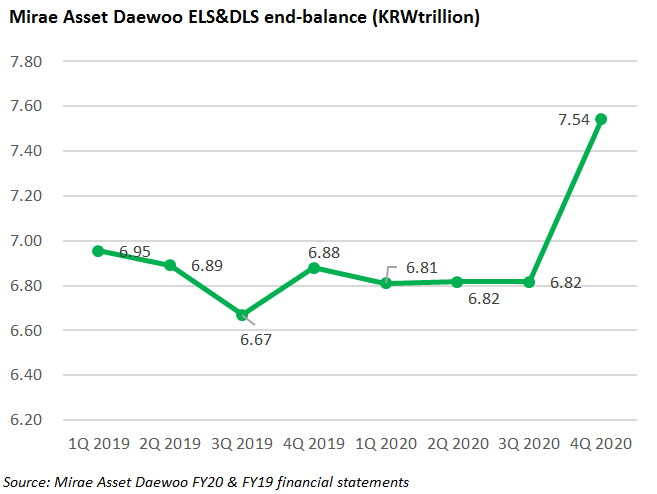 The growth of trading income was driven by ‘fair value increase of invested assets and preemptive risk management which lead to increase in early redemption and continuous issuance of derivative-linked products and build diversified credit portfolio,’ stated Mirae.

Mirae Asset Daewoo also reported a decrease of OTC derivatives held for hedging by 4.1x to KRW32.9 billion, exchange-traded derivatives by 11.3% to KRW58.7 billion and ELS/DLS by 12.2% to KRW655.7 billion compared with a quarter ago. Meanwhile, OTC derivatives rose by 19.6% to KRW1.32 trillion.

The largest investment banking and stock brokerage company by market capitalisation in South Korea, headed by Hyun Man Choi (pictured), had a retail investor portion of 77.6%, foreign investor of 11.8% and institutional investor of 10.6% as of the end of 2020.

Mirae Asset Daewoo is eyeing overseas assets as domestic investment ‘has entered into a low-growth phase’.

Efforts around digital transformation included automation in the trading division which houses the hub for sales and trading of equity and fixed income, currency, and commodity (FICC) derivative products.

‘We have built a new trading infrastructure, around the Busan Internet Data Center (IDC), and began to prepare for setting up our global trading desk,’ stated the report. ‘We also established a market using an algorithm trading system and generated profits through arbitraging, while improving the competitiveness of structured products by making efforts to develop hybrid and FX-linked products and increasing the efficiency in FICC.’

Despite an overall scale-down in the South Korean market, Mirae Asset Daewoo remained the fourth most active issuer and distributor by issuance in 2020 and marketed 546 products in the form of ELS (430), equity-linked bonds (80) and derivative-linked bonds (36) in Q4 – translating to 28.3% of its full-year issuance, SRP database shows.