Mitsubishi UFJ held the competition at arm's length to retain top spot in 2021.

2021 saw a steady performance from the Japanese structured products market. The 793 products that were issued between 1 January and 31 December collected an estimated JPY1.68 trillion (US$15.3 billion) – a slight increase from the previous year (FY2020: JPY1.58 trillion from 759 products).

Mitsubishi UFJ, which achieved sales of JPY410 billion from 85 products, was the most active issuer group with a share of just under a quarter of the market (24.5%).

Municipality Finance (MuniFin), a company owned by Finnish municipalities, pension fund Keva, and the Republic of Finland, came second with an 11% share of the market while SEK, a Swedish state owned export credit corporation, completed the top three with a 10.7% market share.

The best-selling product of the year was issued on the paper of Morgan Stanley. KI M20260610, a five-year registered note linked to the Nikkei 225 and S&P 500, sold JPY23.2 billion during its subscription period. It pays a potential annual coupon of seven percent and Bank of New York Mellon acts as the derivatives manufacturer.

Goldman Sachs was responsible for the best performing product in 2021. The bank’s 複数指数連動M20231124 saw its knockout feature triggered at the first time of asking – three months into a three year tenor – after both the Nikkei 225 and S&P 500 closed above 105% of their starting price, returning 103% (15.25% pa). It was distributed via 82 Securities and sold JPY4.6 billion at inception.

Check out the below pie-chart to view the top 10 issuer groups in the Japanese market. 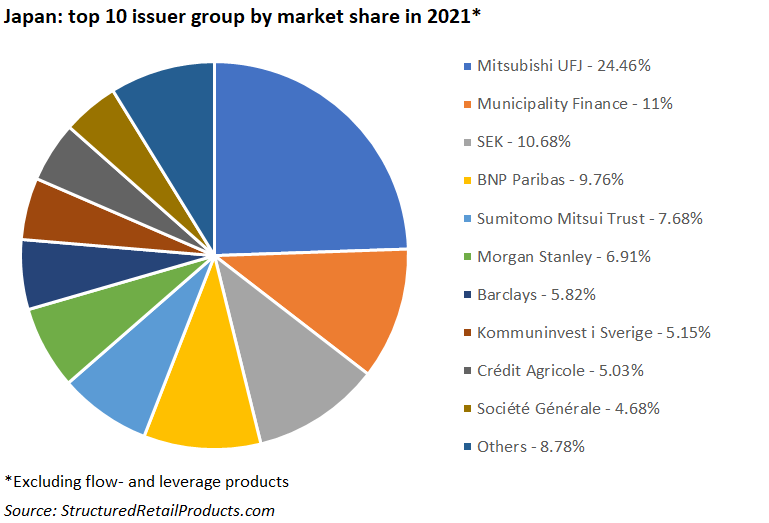